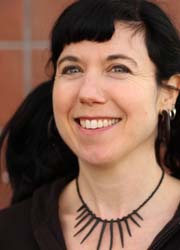 Michelle Steinberg began Consultas Naturistas, the nutrition and herbal medicine program at Street Level Health Project, in November 2009. The program has since flourished, providing free client-centered integrative healthcare to those who could not otherwise access it. Michelle graduated with a Bachelor’s from Wesleyan University and a Master’s of Science in Nutrition from the University of Bridgeport. She also completed a three-year course in herbal medicine at the Ohlone Center of Herbal Studies, with subsequent supervision from the Northeastern School of Botanical Medicine. Michelle won the 2015 Diversity, Equity, and Inclusion Award from the American Herbalist Guild for her work at Street Level and she has contributed articles to several health care journals. She is a board member for the organization Integrative Medicine for the Underserved.

Michelle grew up in Washington D.C. and relocated to the Bay Area in 1995. Prior to her work in healthcare, Michelle initiated a program to offer English-as-Second-Language classes at Street Level in 2002, having previously started an ESL collective at the San Francisco Day Labor Program. In addition to her clinical work, Michelle is also a documentary filmmaker and her last film, Beyond Recognition, is currently being broadcast nationally on public television. She is currently in production on a documentary about the importance of culturally responsive integrative health care in healing trauma, which will feature Lowell Community Health Center and Street Level Health Project!